In the summer of 1991, we took the trip of a lifetime. The Cooper family four flew our Cessna 172, to Anchorage Alaska.

It was the first time any of us had been to Alaska, but it was a place I had always wanted to go. My courageous family... PJ, Kristi, and Nancy put their lives in my hands as we headed North. 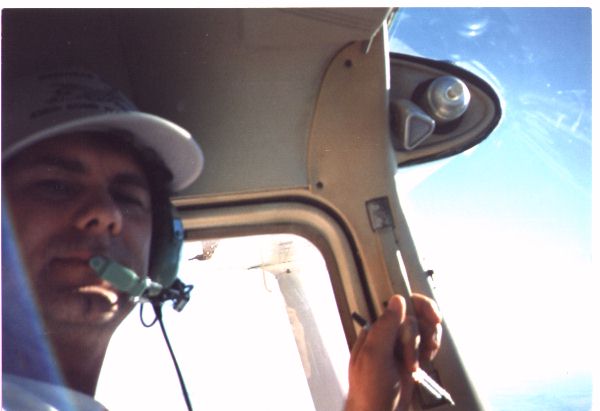 We are just getting good and started at this point. This is me, settling in for a lot of flying over the next few days. This was taken somewhere over Kansas, en route for South Dakota. At this point, I was probably still naive enough to believe we were going to be four days en route. My original plan was for us to take four days of travel, with a flying start out of Oklahoma City. We left Houston mid afternoon on a Saturday, knowing we would spend the night with Nancy's Aunt and Uncle in Oklahoma City. The following day, we had reservations for two days at Custer State park near Rapid City, South Dakota.. Custer State park was the only place we actually had made any reservations, with the rest of the trip planned on a "play it by ear" basis. Lucky thing, because Custer State Park was the last point we actually made on any kind of real schedule. 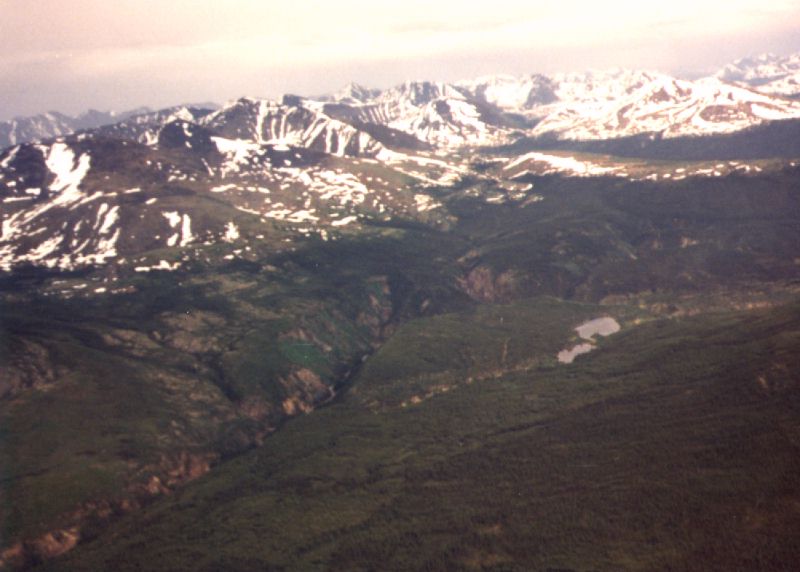 This is a photo of the Liard River, about 35 miles before reaching the Liard River outpost, between Ft. Nelson and Watson Lake. There is a runway and lodge at the outpost, which was originally one of our planned overnight stops. We did not get to stop here either going or coming, because of other delays, that had put us off of our original over optimistic schedule. We cut across a fairly large area of wilderness, joining back up with the highway here, to avoid following the Alaska Highway through some fairly treacherous mountains. This was at the advice of one of the gentlemen at the Canadian Flight Service Station in Fort Nelson. At each FSS along the route, I would take the time to go discuss the weather, look at the radar, and get some general advice from these friendly Flight Service Specialists. There was an FSS at nearly every airport we stopped at in Canada, which is a far cry from what you see in the US these days. This is where we started seeing some of the first snow capped mountains, and really rugged terrain.

There were a few tense moments before the previous fuel stop at Ft. Nelson, due to some lower than expected scattered clouds (which looked like they could go below scattered very quickly), and some light rain. I have some video, but no still shots of those tense moments when it started to rain. I was watching the landmarks very carefully, taking special notice of the previously identified emergency landing strips along this portion of the route.. 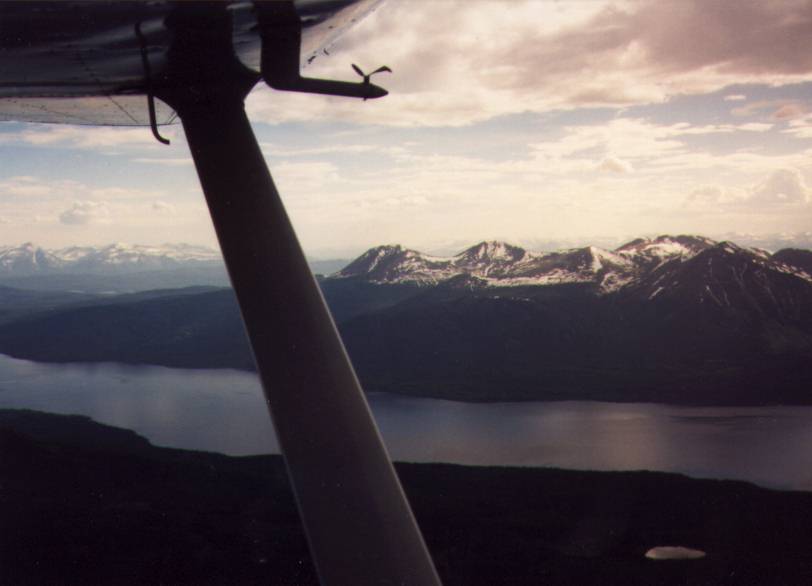 Lake Teslin. is a 75 mile long lake between Watson Lake and Whitehorse. The Alaska highway intersects the middle of this long, skinny lake, and follows along the northeast shore. The Alaska highway turns south briefly before reaching the lake, and you drop back down into British Columbia briefly if you are following the highway. The midpoint of the lake itself lies just north of the Yukon and BC border. 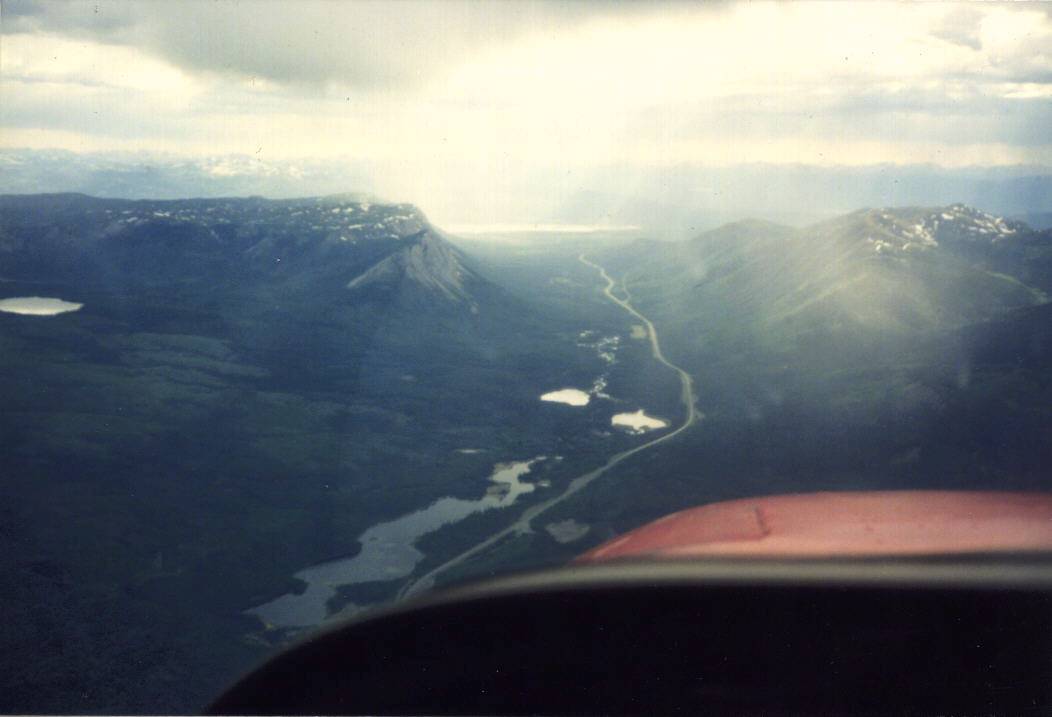 Just past Lake Teslin, is this beautiful stretch of highway. This is about where along the way, I realized the scope of what we were really doing.... On the left ahead, is White Mountain. We are cruising along at about 6500 ft. MSL, which was about 3500 ft. above the Alaska Highway. As we passed White Mountain, I could tell that we were less than 1000 ft. above it's peak. The highway turns right almost 90 degrees just ahead of the Mountain at a little outpost called Jake's corner. 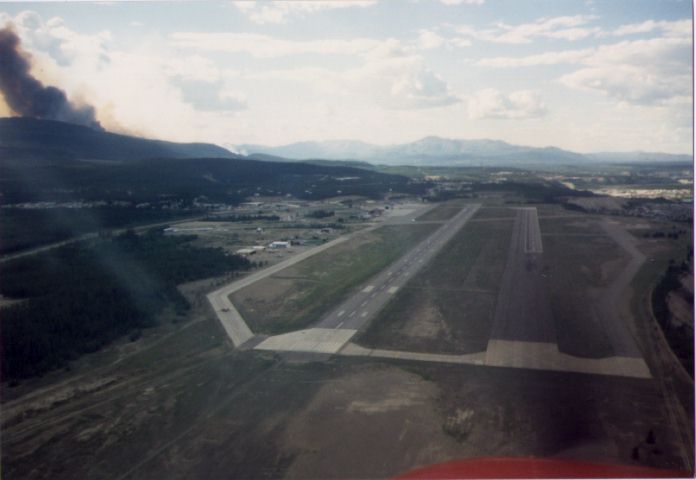 We called it a day when we reached Whitehorse. We had started in Ft. St. John that morning, with fuel and food stops in Fort Nelson, and Watson Lake. This covered about 640 nm for the day, which was an above average day. The smoke coming from the back side of the hillside on the left was from a forest fire that had been burning for several days. All night we heard water bombers flying in and dumping water on the blaze. By the next morning the fire appeared to be out, but the valley we followed out of Whitehorse contained smoke that we could smell for the next 100 miles.

One of the more interesting sites at Whitehorse is the DC-3 aircraft that is used for a wind direction indicator. It has a perfectly balanced mount at the center of gravity, and the aircraft will turn directly into the wind with as little as a 2 knot breeze. Unfortunately you can't see it in this photo.

On the way up, we spent the night in the hotel directly across the street from the airport. It was not that great a place to stay, and appeared to cater primarily to truckers (no offense meant to any truckers...). It was un-airconditioned which is normally okay in Whitehorse, but on the day we were there it hit 91 degrees, and there weren't even screens on the windows, to allow you to open them. Needless to say, on the way back, when we needed to stay in Whitehorse again (due to weather), we found a place downtown... with air, and other amenities such as a nitely touristy "Gold rush review" song and dance show. Another interesting site to visit while there is the Klondike Queen river boat, which was docked on the Yukon River, just below the airport.

This is Kluane Lake, one of the most beautiful sights along our journey (aside from the runway at Merrill field!) Like everything else in this part of the world the features of the land are huge. This lake is 35 miles long. We are only seeing the very tip of it here. We are about 35 miles past Haynes Junction, halfway between Whitehorse YT, and Northway Alaska. Haynes junction is where one of the few roads branching off of the Alaska Highway turns south and cuts across the southern portion of the Yukon Territory to reach Haynes, and Skagway Alaska.

Kluane lake is glacier fed, although you can not actually see Kaskawulsh Glacier from this angle. The land mass south of the lake is mud, not the Glacier as you initially think. I was tempted to turn South here and fly up the valley, around the corner, to get a peak at the glacier itself... but I quess I'm not quiet adventuresome enough to get that far off this lightly beaten trail to take a look. A contributing factor was also the thundershower you can see off in the distance, which is actually right about where the Glacier terminated into the river that feds the lake.

In the lower middle of the photograph, you can see a portion of the Silver City runway at the town of Silver Creek, Yukon Territory. The town rests along the Southeast edge of Kluane Lake. Along the shoreline of the lake, you can faintly make out the Alaska highway, as it lines the edges of the lake. Even less obvious, is where it cuts across the mud flat. Look for the straight line across the mud just south of the lake. 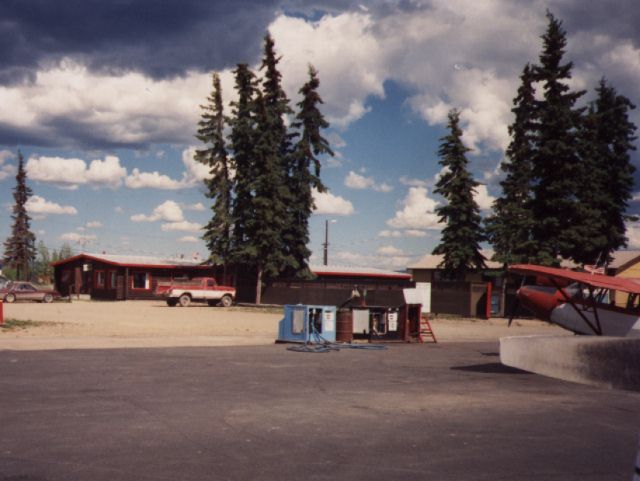 Alaska ! We've finally arrived on Alaska soil ! Northway is the "port of entry" for this part of the state, and therefore where you go through customs. After sitting in the plane for awhile (I had read that you shouldn't get out until the customs officer arrives), we gave up on the officer and got out of the plane. We had pulled up and parked in front of the pink trailer with the "US Customs Office" sign out front. We finally figured out that the officer was in the log cabin FBO/cafe, not the pink trailor. I remember he fussed at us a bit for getting out of the plane, and then proceeded to look through some of our things that were in the plane. This was much more thorough treatment than when we entered Canada at Lethbridge... but no big deal. He was still pretty friendly.

Like in Canada, there was a real live FSS station on the field, which I of course visited to get the latest weather. According to the logs, and my jogged memory, we got out of there pretty quick because of the thundershowers that were moving in. Until I read through my logbook entries, I had forgotten how many segments of the trip involved either flying around or through light rain, or quick departures to avoid it. Northway was our last stop before Merrill Field, in Anchorage... This is where I realized that we were really going to make it ! It sounds strange to have even had thoughts otherwise after traveling even half way..., but the first trip is an incredibily long journey in which progress is so slow, it seems it's never really going to end.

Nothing exciting really happened between Northway and Anchorage, other than the engine quitting near gunsight mountain, on the home stretch. The passengers were all asleep, but awakened with a start as the engine suddenly grew much quieter. The whole ordeal only lasted about 10 seconds as a scrambled to switch the fuel tank from the now dry tank to the one that was nearly full. I hate it when that happens! I've often wondered how many accidents have been caused by pilots trying to abide by the recommendation (actually an AD on gravity fed Cessnas) to switch back and forth between tanks when flying above 5,000 ft.

We finally made it to Anchorage... I was so relieved to finally reach our destination, that I didn't set foot at the airport again, except to change the oil in the plane before the return trip. Our 8 days on the ground was quite an adventure itself. Some of what we did was very much touristy type stuff.... such as the Keni Wildelife tour out of Seward. We also did some local stuff like going to the zoo. There we saw Binky the polar bear (before she became famous for trying to tear off a lady's leg who jumped the fence to take photos). I've got some photo's of some of the spots we visited while there. One of the most interesting side-trips on this journey, was to my sister's ex's gold claim near Hope. The day we arrived, they were getting ready to set out the next day for the gold claim. We camped out there for one night and panned for gold. Getting there was not easy, and involved about a 3 mile hike, and a crossing of Resurrection Creek on a makeshift tram stretched across the rushing waters. I plan to add some photos to the site later to document that part of the trip. 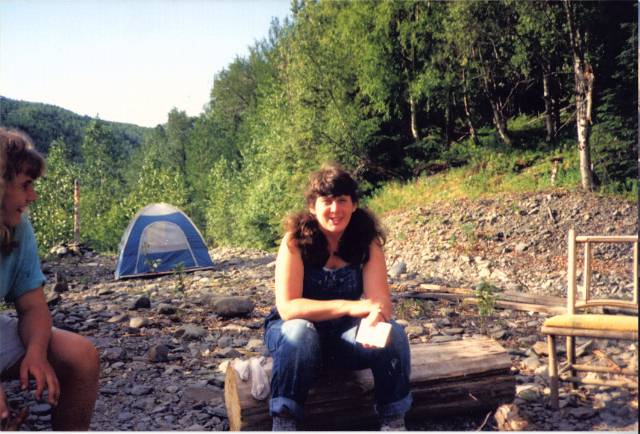 Here's sis.... not an Alaskan native... but she definitely has that spirit, to have migrated north this far from her last home.. Miami, Fl.